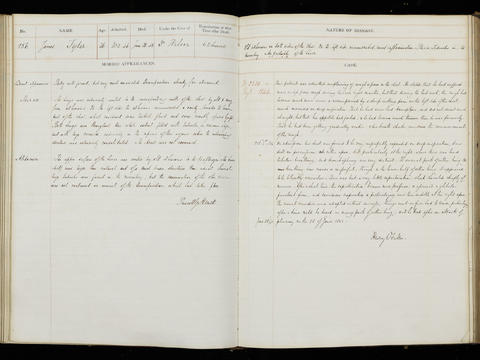 Occupation or role: [No occupation stated]
Age: 26
Gender: Male
Date of admission: 2 Oct 1844
Date of death: 28 Jun 1845
Disease (transcribed): Old adhesions on both sides of the chest. On the left side circumscribed. Recent inflammation. Phthisis. Tubercles in the mesentery. Hypertrophy of the liver
Disease (standardised): Adhesion (Chest); Inflammation (Chest); Tuberculosis (Lungs); Tuberculosis (Abdomen); Disease (Liver)
Admitted under the care of: Wilson, James Arthur
Medical examination performed by: Hewett, Prescott Gardner
Post mortem examination performed by: Fuller, Henry William
Medical notes: 'This patient was admitted complaining of cough & pain in the chest. He stated that he had suffered more or less from cough during the last eight months, but that during the last week, the cough had become much more severe & accompanied by a sharp, cutting pain on the left side of the chest’
Body parts examined in the post mortem: Thorax, abdomen