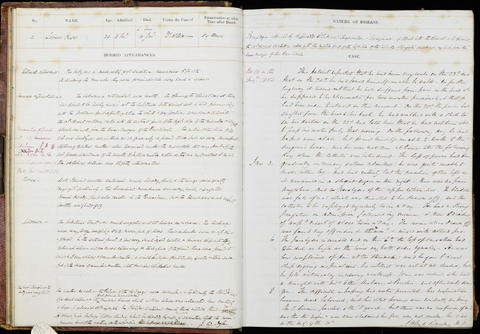 Occupation or role: [No occupation stated]
Age: 39
Gender: Male
Date of admission: 3 Jan 1852
Date of death: 10 Jan 1852
Disease (transcribed): Paraplegia attended by difficult and laboured respiration. Ecchymosis of blood into the spinal cord opposite the 10th dorsal vertebra, also into the middle part of the left side of the medulla oblongata at about one inch from the lower margin of the pons varolii
Disease (standardised): Paraplegia (Brain); Ecchymosis (Spinal cord); Ecchymosis (Brain)
Admitted under the care of: Wilson, James Arthur
Medical examination performed by: Barclay, Andrew Whyte
Post mortem examination performed by: Ogle, John William
Medical notes: The patient reported that on the 25th he had found himself unable to walk, and it turned out that he had suffered from pain in the head for two months previously.
Body parts examined in the post mortem: Cranium, spinal column, thorax and abdomen
Type of incident: n/a