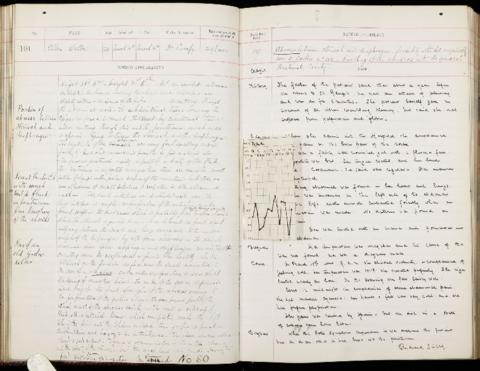 Occupation or role: [Child of] Gardener
Age: 24
Gender: Female
Date of admission: 10 Mar 1888
Date of death: 16 Mar 1888
Disease (transcribed): Abscess between stomach and diaphragm. Possibly started originally from a gastric ulcer. Bursting of the abscess into the general peritoneal cavity
Disease (standardised): Abscess (Stomach, diaphragm); Ulcer (Stomach)
Admitted under the care of: Cavafy, John
Medical examination performed by: Penrose, Francis George
Post mortem examination performed by: Sisley, Richard
Medical notes: 'The father of the patient said that about a year before she came to St George’s she had an attack of ‘pleurisy’ and was ill for 5 months. The patient herself gave no account of an illness resembling pleurisy, but said she had suffered from palpitations and ‘globus’. When she came into the hospital she complained of pain at the lower part of the thorax’
Body parts examined in the post mortem: Body parts examined: Abdomen, liver, spleen, kidneys, ovaries, heart, lungs