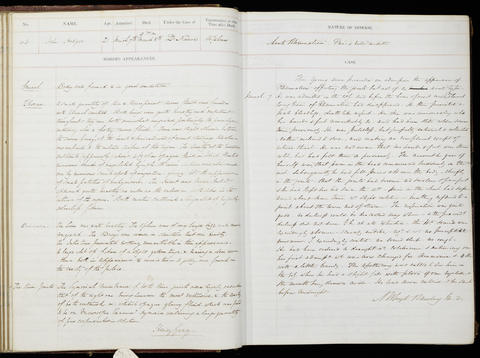 Occupation or role: [Occupation not stated]
Age: 21
Gender: Male
Date of admission: 7 Mar 1849
Date of death: 8 Mar 1849
Disease (transcribed): Acute rheumatism. Peri- & endo?carditis
Disease (standardised): Rheumatism (Joints); Pericarditis (Heart); Endocarditis (Heart)
Admitted under the care of: Nairne, Robert
Medical examination performed by: Barclay, Andrew Whyte
Post mortem examination performed by: Gray, Henry
Medical notes: 'This young man presented on admission the appearance of rheumatism affecting the joints but not of an acute type. He was admitted in the evening, and before the hour of visit next day almost every trace of rheumatism had disappeared. He then presented a pale, bloodless, death-like aspect. His skin was universally cold, his hands & feet remarkably so, and had been still colder some time previously. He was pulseless, but perfectly rational & collected, rather inclined to doze, and making no complaint except of intense thirst’
Body parts examined in the post mortem: Thorax, abdomen, knee joints