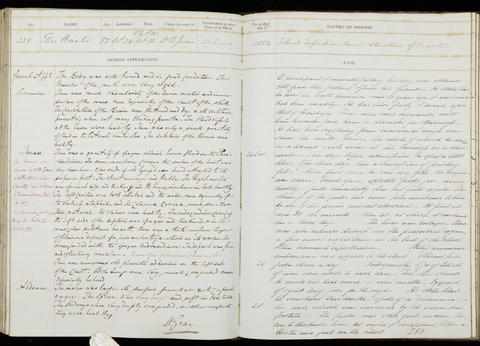 Occupation or role: Shoemaker
Age: 33
Gender: Male
Date of admission: 24 Oct 1855
Date of death: 31 Oct 1855
Disease (transcribed): Fibroid deposit in muscular structure of heart
Disease (standardised): Leiomyoma (Heart)
Admitted under the care of: Bence Jones, Henry
Medical examination performed by: Rogers, George Goddard
Post mortem examination performed by: Gray, Henry
Medical notes: This man stated that he lived in North America some ten years ago and ever since had been weakly. He had been suffering from occasional cough ever since the winter, during the whole of which he worked in a damp and cold room. Ten days before admission he spat a blood and had a succession of fainting fits.
Body parts examined in the post mortem: Cranium, thorax and abdomen
Type of incident: n/a