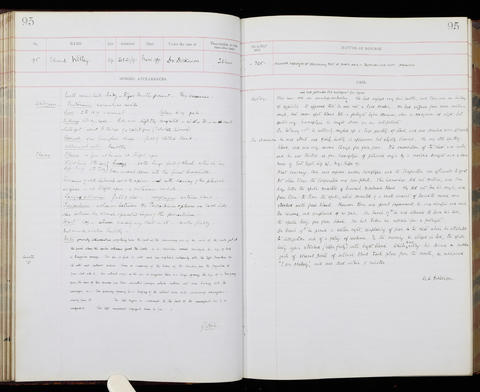 Occupation or role: Omnibus conductor
Age: 34
Gender: Male
Date of admission: 21 Feb 1891
Date of death: 19 Mar 1891
Disease (transcribed): Saccular aneurysm of descending part of aortic arch. Rupture into left bronchus
Disease (standardised): Aneurysm (Aorta)
Admitted under the care of: Dickinson, William Howship
Medical examination performed by: Hale, Geoffrey Edward
Post mortem examination performed by: Dickinson, William Lee
Medical notes: 'This man was an omnibus conductor, and had followed this employment for 8 years. He had enjoyed very fair health, and there was no history of syphilis. It appeared that he was not a hard drinker. He had suffered from some winter-cough, but never spat blood till a fortnight before admission, when in consequence of slight but continuing haemoptysis he sought advice as an out-patient'
Body parts examined in the post mortem: Abdomen, thorax