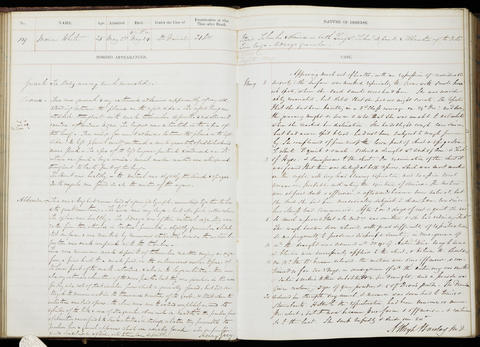 Occupation or role: [Occupation not stated]
Age: 25
Gender: Female
Date of admission: 2 May 1849
Date of death: 24 May 1849
Disease (transcribed): Phthisis. Tubercles & vomicae in both lungs. Tubercular deposit, & ulceration of the intestines. Liver large. Kidneys granular
Disease (standardised): Tuberculosis (Lungs); Abscess (Lungs); Deposit (Intestines); Ulcer (Intestines); Disease (Liver, kidneys)
Admitted under the care of: Nairne, Robert
Medical examination performed by: Barclay, Andrew Whyte
Post mortem examination performed by: Gray, Henry
Medical notes: 'Appearing much out of health, with an expression of considerable anxiety, the surface was marked especially the arms with small brownish spots, where she said small sores had been. She was considerably emaciated, but stated that she had no night sweats. She reported that she had been travelling in a 3rd class carriage on 24th December, and during the journey caught so severe a cold that she was unable to articulate when she reached her destination’
Body parts examined in the post mortem: Thorax, abdomen