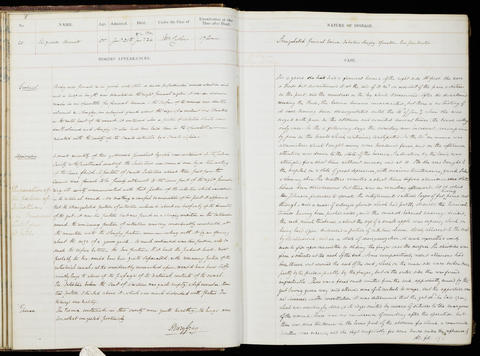 Occupation or role: [Occupation not stated]
Age: 56
Gender: Female
Date of admission: 20 Jan 1848
Date of death: 24 Jan 1849
Disease (transcribed): Strangulated femoral hernia. Intestines sloughy. Operation. Low peritonitis
Disease (standardised): Hernia (Thigh); Sloughing (Intestines); Operation; Peritonitis (Abdomen)
Admitted under the care of: Cutler, Edward
Medical examination performed by: Holl, Harvey Buchanan
Post mortem examination performed by: Gray, Henry
Medical notes: 'For 4 years she had had a femoral hernia of the right side. At first she wore a truss, but discontinued it at the end of 12 months on account of the pain & distress in the part, and the numbness in the leg which it occasioned. After she discontinued wearing the truss, the hernia became incarcerated, but there is no history of it ever having been strangulated until the 14th of January, when she was seized with pain in the abdomen and vomited several times, the bowels acting only once’
Body parts examined in the post mortem: Abdomen, thorax

Preparation of the portion of intestines, see Museum Catalogue 0.b.21[?]