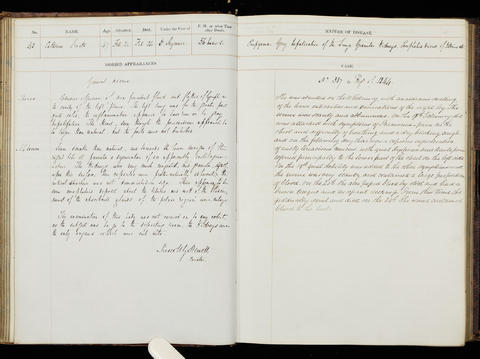 Occupation or role: [No occupation stated]
Age: 47
Gender: Female
Date of admission: 14 February 1844
Date of death: 24 February 1844
Disease (transcribed): Empyema. Grey hepatisation of the lung. Granular kidneys. Encephaloid disease of uterus.
Disease (standardised): Empyema (Thorax); Hepatisation (Lung); Cancer (Uterus); Granular (Kidney)
Admitted under the care of: Seymour, Edward James
Medical examination performed by: n/a
Post mortem examination performed by: Hewett, Prescott Gardner
Medical notes: The patient was admitted with anasarcous swelling of the lower extremities and vesications of the right leg.
Body parts examined in the post mortem: Thorax and abdomen. The examination of this body was not carried on to any extent as the subject was to go to the dissecting room; the kidneys were the only organs which were cut into
Type of incident: n/a