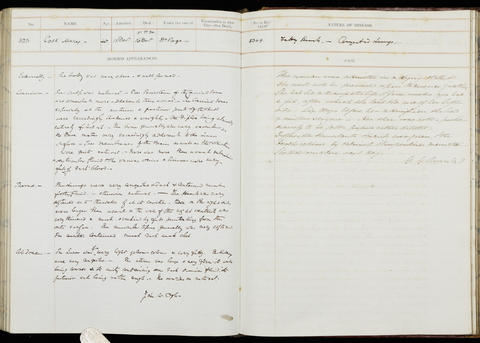 Occupation or role: [No occupation stated]
Age: 40
Gender: Female
Date of admission: 15 Dec 1855
Date of death: 16 Dec 1855
Disease (transcribed): Fatty Heart. Congested lungs.
Disease (standardised): Disease (Heart); Disease (Lung)
Admitted under the care of: Page, William Emanuel
Medical examination performed by: Rogers, George Goddard
Post mortem examination performed by: Ogle, John William
Medical notes: This woman was admitted in a dying state and she could not be prevailed upon to answer questions. Five weeks ago she had had a fit, after which she had lost the use of her left side. Six days before her admission she had a milder seizure.
Body parts examined in the post mortem: Cranium, thorax and abdomen
Type of incident: n/a