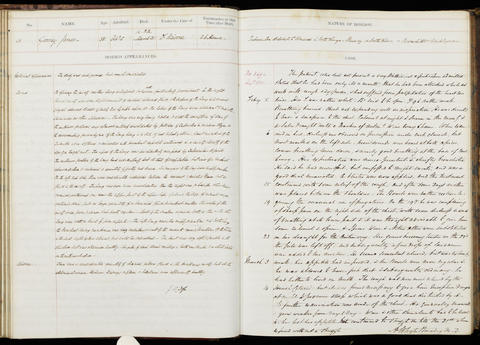 Occupation or role: [No occupation stated]
Age: 38
Gender: Male
Date of admission: 5 Feb 1851
Date of death: 31 Mar 1851
Disease (transcribed): Tubercular deposits & vomicae in both lungs. Pleurisy on both sides. Bronchitis & emphysema
Disease (standardised): Tuberculosis (Lungs); Pleurisy (Lungs); Bronchitis (Lungs); Emphysema (Lungs)
Admitted under the care of: Nairne, Robert
Medical examination performed by: Barclay, Andrew Whyte
Post mortem examination performed by: Ogle, John William
Medical notes: 'This patient, who did not present a very phthisical aspect when admitted stated that he had been only ill a month, that he had been attacked while at work with cough & duspnoea, & had suffered from palpitation of the heart ever since’
Body parts examined in the post mortem: Thorax, abdomen