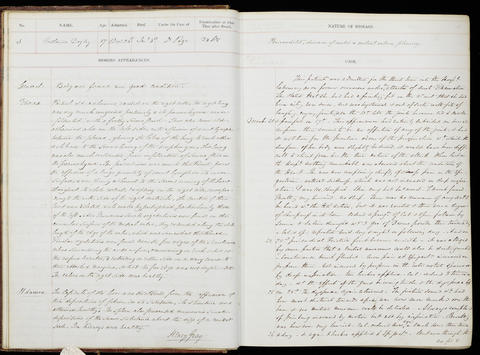 Occupation or role: [Occupation not stated]
Age: 17
Gender: Female
Date of admission: 20 Dec 1848
Date of death: 3 Jan 1849
Disease (transcribed): Pericarditis. Disease of aortic & mitral valves. Pleurisy
Disease (standardised): Pericarditis (Heart); Disease (Heart); Pleurisy (Lungs)
Admitted under the care of: Page, William Emanuel
Medical examination performed by: Barclay, Andrew Whyte
Post mortem examination performed by: Gray, Henry
Medical notes: 'This patient was admitted for the third time into the hospital labouring as on former occasions under an attack of acute rheumatism. She stated that she had had a fainting fit on the 11th inst, that she had been ailing ever since, and was hysterical & out of sorts, with fits of laughing, crying, fainting &c on the 13th till the joints became red & swollen & painful on 17th. This appearance had entirely subsided on her admission’
Body parts examined in the post mortem: Thorax, abdomen