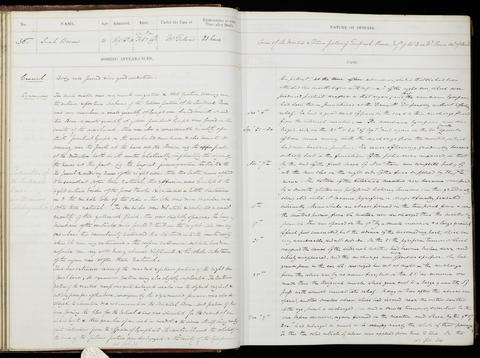 Occupation or role: [Occupation not stated]
Age: 16
Gender: Female
Date of admission: 6 Sep 1848
Date of death: 19 Feb 1849
Disease (transcribed): Caries of the mastoid & petrous portions of temporal bone. Inflammation of the dura mater
Disease (standardised): Caries (Skull); Inflammation (Brain)
Admitted under the care of: Tatum, Thomas
Medical examination performed by: Holl, Harvey Buchanan
Post mortem examination performed by: Gray, Henry
Medical notes: 'This patient, at the time of her admission, stated that she had been attacked two months before with inflammation of the right ear, which soon produced partial deafness in that organ; and that the membrana lympani had been twice punctured at the Dean Street Dispensary without affording relief. She has a good deal of pain in the ear & a thin discharge flowed from the internal meatus’
Body parts examined in the post mortem: Cranium