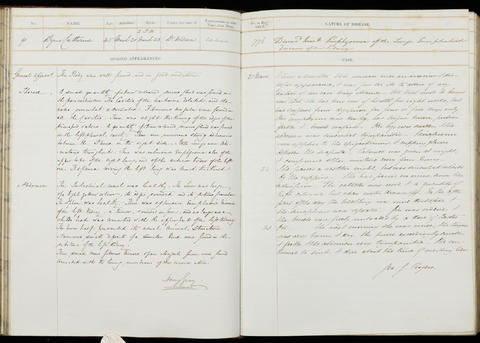 Occupation or role: [No occupation stated]
Age: 35
Gender: Female
Date of admission: 21 Mar 1855
Date of death: 23 Mar 1855
Disease (transcribed): Diseased Heart. Emphysema of the lungs. Encephaloid disease of the Kidneys
Disease (standardised): Disease (Heart); Emphysema (Lung); Cancer (Kidney)
Admitted under the care of: Wilson, James Arthur
Medical examination performed by: Rogers, George Goddard
Post mortem examination performed by: Gray, Henry
Medical notes: When admitted, this woman was anxious and distressed, and far too ill to allow any history of her case being obtained. All that could be learnt was that she had been out of health for eight weeks.
Body parts examined in the post mortem: Thorax and abdomen
Type of incident: n/a