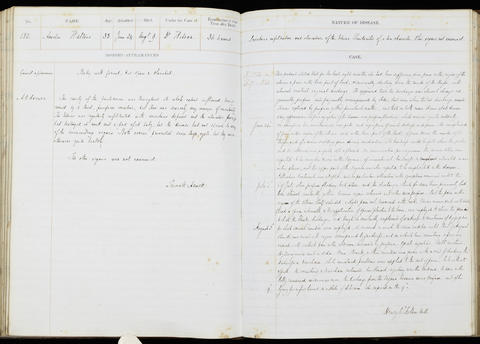 Occupation or role: [No occupation stated]
Age: 33
Gender: Female
Date of admission: 24 Jun 1846
Date of death: 9 Aug 1846
Disease (transcribed): Scirrhous infiltration and ulceration of the uterus. Peritonitis of a low character. Other organs not examined.
Disease (standardised): Cancer (Uterus); Ulcer (Uterus); Peritonitis (Abdomen)
Admitted under the care of: Wilson, James Arthur
Medical examination performed by: Fuller, Henry William
Post mortem examination performed by: Hewett, Prescott Gardner
Medical notes: This patient stated that for the last eight months, she had been suffering from pain in the region of the uterus and pain in the lower part of the back, occasionally shooting down the inside of the thighs with almost constant vaginal discharge.
Body parts examined in the post mortem: Abdomen
Type of incident: n/a