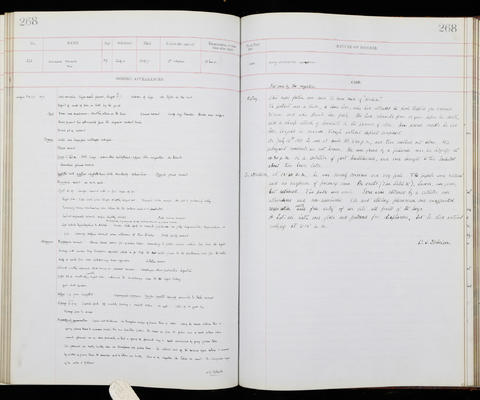 Occupation or role: Tailor
Age: 39
Gender: Male
Date of admission: 16 Jul 1891
Date of death: 17 Jul 1891
Disease (transcribed): Early interstitial nephritis
Disease (standardised): Nephritis (Kidneys)
Admitted under the care of: Whipham, Thomas Tillyer
Medical examination performed by: Rolleston, Humphry Davy
Post mortem examination performed by: Dickinson, William Lee
Medical notes: 'Not seen by the registrar. This man's father was said to have died of ‘cirrhosis'. The patient was a tailor, a loose liver, who had attended the Lock Hospital for venereal disease and who drank beer freely. He had rheumatic fever 12 years before his death and a sharp attack of bronchitis in the summer of 1890. For several months he had been languid in manner though without definite complaint. On July 16th 1891 he was at work till 3.30pm, and then walked out alone. His subsequent movements are not known. He was found by a policeman near his lodgings at 10.30pm in a condition of great breathlessness, and was brought to this hospital about two hours later'
Body parts examined in the post mortem: Head, thorax, abdomen