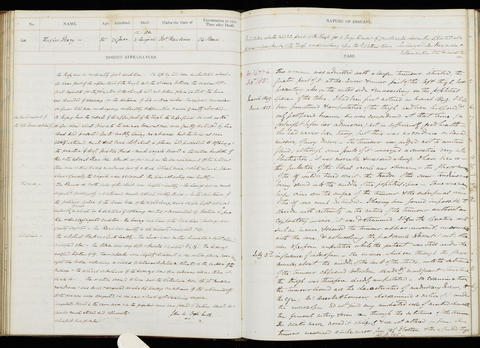 Admitted under the care of: Hawkins, Caesar Henry
Medical examination performed by: Holmes, Timothy and Blagden, Robert
Post mortem examination performed by: Ogle, John William
Medical notes: 'This woman was admitted with a large tumour situated, the greated part of it at the lower & inner part of the left thigh, but presenting also on the outer side & encroaching on the popliteal space of the tibia. It had been first noticed in March 1849. It had been punctured & amputation of the thigh had been proposed, & only postponed because she was considered at that time (a fortnight before admission) not in sufficiently good health’
Body parts examined in the post mortem: Left lower extremity, thorax, abdomen