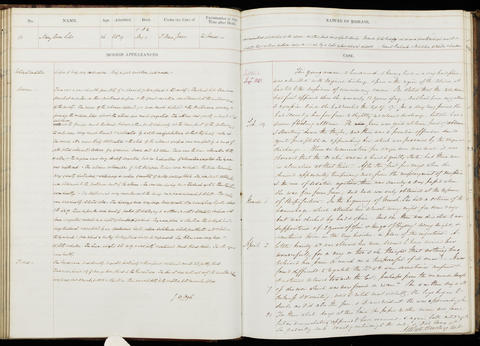 Occupation or role: Housemaid
Age: 26
Gender: Female
Date of admission: 19 Feb 1851
Date of death: 4 May 1851
Disease (transcribed): Carcinomatous alterations of the uterus. No other part being affected thereby. Disease of the kidneys which were greatly enlarged, smooth & lobulated, their cortical portions being occupied by a light yellow-coloured deposit. Recent peritonitis & dilatation of bladder & ureter
Disease (standardised): Carcinoma (Uterus); Disease (Kidneys); Peritonitis (Abdomen); Disease (Bladder, ureter)
Admitted under the care of: Bence Jones, Henry
Medical examination performed by: Barclay, Andrew Whyte
Post mortem examination performed by: Ogle, John William
Medical notes: 'This young woman, a housemaid, & having lived in a very hard place, was admitted with vaginal discharge, & pain in the region of the uterus, which had led to the suspicion of commencing cancer. She stated that the catamenia [menstruation] had first appeared when she was only 12 years of age, and had been irregular & excessive since she had reached the age of 17. For a very long period she had scarcely been free from a slightly red-coloured discharge, but she had a severe flooding at times’
Body parts examined in the post mortem: Abdomen, thorax