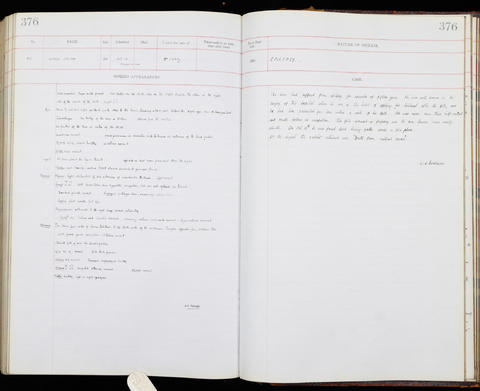 Occupation or role: No occupation
Age: 35
Gender: Male
Date of admission: 15 Oct 1891
Date of death: 15 Oct 1891
Disease (transcribed): Epilepsy
Disease (standardised): Epilepsy (Brain)
Admitted under the care of: Cavafy, John
Medical examination performed by: Rolleston, Humphry Davy
Post mortem examination performed by: Dickinson, William Lee
Medical notes: 'This man had suffered from epilepsy for upwards of fifteen years. He was well known in the surgery of this hospital where he was in the habit of applying for treatment after the fits, and he had been prescribed for here within a week of his death. He was never more than half-witted and could follow no occupation. The fits increased in frequency and the man became more nearly idiotic. On Oct 15th he was found dead, having fallen across a fire place'
Body parts examined in the post mortem: Head, throat, thorax, abdomen