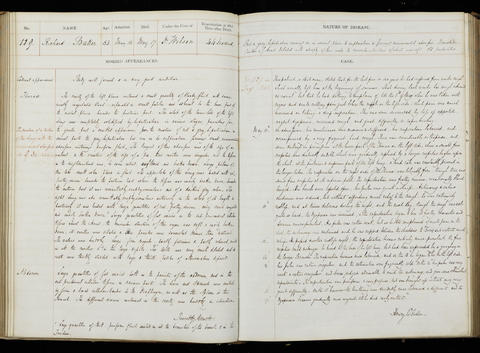 Occupation or role: [No occupation stated]
Age: 58
Gender: Male
Date of admission: 10 May 1845
Date of death: 17 May 1845
Disease (transcribed): Red & gray hepatisation running on in several places to suppuration & forming circumscribed abscesses. Bronchitis. Cavities of heart dilated with atrophy of their walls, the muscular structure of which was soft. Old peritonitis
Disease (standardised): Hepatisation (Lungs); Abscess (Lungs); Bronchitis (Lungs); Disease (Heart); Peritonitis (Abdomen)
Admitted under the care of: Wilson, James Arthur
Medical examination performed by: Hewett, Prescott Gardner
Post mortem examination performed by: Fuller, Henry William
Medical notes: 'This patient, a stout man, stated that for the last five or six years he had suffered from winter cough which usually left him at the beginning of summer. That during last winter his cough returned as usual, but that he had nothing to complain of till the 3rd of May when he was taken with rigors and acute cutting pain just below the nipple on the left side’
Body parts examined in the post mortem: Thorax, abdomen

Preparation of a portion of this lung with the circumscribed abscesses, see G.34 catalogue