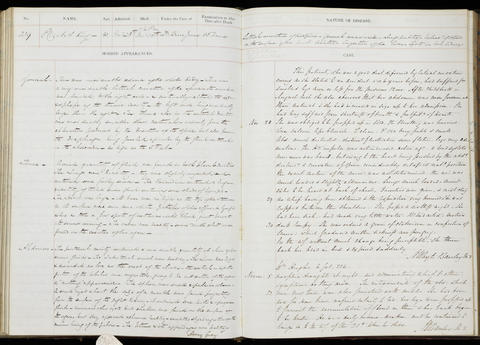 Occupation or role: [Occupation not stated]
Age: 40
Gender: Female
Date of admission: 28 Nov 1849
Date of death: 30 Nov 1849
Disease (transcribed): Lateral curvature of the spine. General anasarca. Lungs healthy. Extravasation of blood on the surface of the heart. Ascites. Congestion of the liver. Cysts in both kidneys
Disease (standardised): Spinal curvatures (Spine); Edema (Systemic); Extravasation (Heart); Ascites (Peritoneum); Congestion (Liver); Cyst (Kidneys)
Admitted under the care of: Bence Jones, Henry
Medical examination performed by: Barclay, Andrew Whyte
Post mortem examination performed by: Gray, Henry
Medical notes: 'This patient, who was a good deal deformed by lateral curvature owing, as she stated, to an accident 5 or 6 years before, had suffered from swelled legs more or less for the previous 12 months. After childbirth in August last she also observed that her abdomen was more prominent than natural & she had increased in size up to her admission. She had long suffered from shortness of breath & palpitations of heart’
Body parts examined in the post mortem: Thorax, abdomen