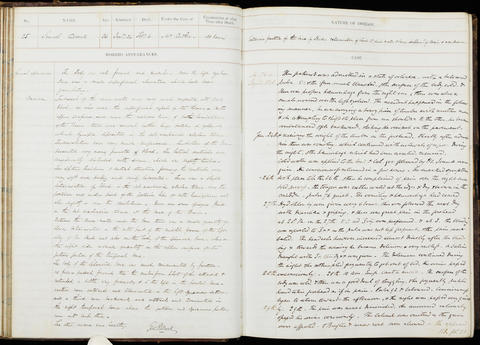 Occupation or role: [No occupation stated]
Age: 36
Gender: Male
Date of admission: 24 Jan 1848
Date of death: 6 Feb 1848
Disease (transcribed): Extensive fracture of the base of skull. Extravasation of blood beneath dura mater and bone. Inflammation of brain and membranes.
Disease (standardised): Fracture (Skull); Extravasation (Brain); Inflammation (Brain)
Admitted under the care of: Cutler, Edward
Medical examination performed by: Blagden, Robert
Post mortem examination performed by: Pollock, George
Medical notes: This patient was admitted in a state of collapse. He had been carrying a heavy piece of timber with another man and in attempting to shift its place from one shoulder to the other, he became overbalanced and fell backwards striking the pavement.
Body parts examined in the post mortem: Cranium
Type of incident: Trauma/accident