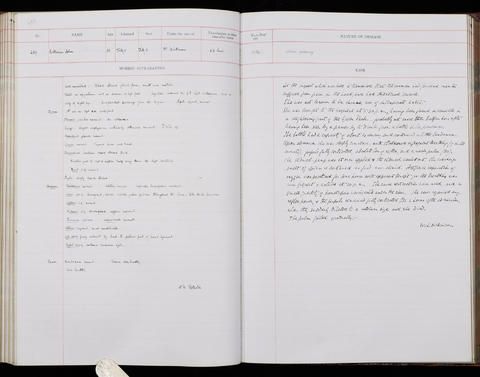 Occupation or role: [No occupation stated]
Age: 33
Gender: Female
Date of admission: 11 Jul 1890
Date of death: 11 Jul 1890
Disease (transcribed): Opium poisoning
Disease (standardised): Poisoning (Systemic)
Admitted under the care of: Dickinson, William Howship
Medical examination performed by: Dickinson, William Lee
Post mortem examination performed by: Rolleston, Humphry Davy
Medical notes: At the inquest which was held it transpired that the woman had for some months suffered from pain in the head, and had threatened suicide. She was not known to be insane, nor of intemperate habits. She had been found insensible in a neighbouring part of Green Park, probably not more than half an hour after having been seen by a passer-by to drink from a bottle in her possession.
Body parts examined in the post mortem: Pleurae, lungs, bronchial glands, larynx, thyroid, pericardium, heart, aorta, peritoneum, intestines, appendix vermiform, liver, spleen, kidneys, pancreas, suprarenals, uterus, ovaries, brain and ears
Type of incident: Suicide