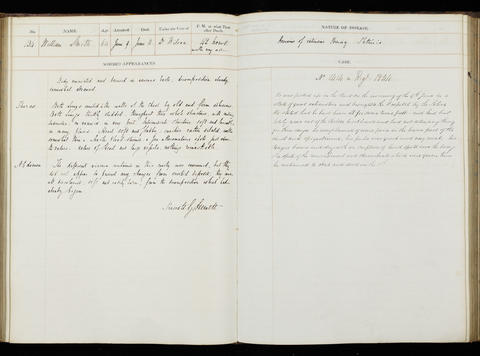 Occupation or role: [No occupation stated]
Age: 60
Gender: Male
Date of admission: 9 Jun 1844
Date of death: 11 Jun 1844
Disease (transcribed): Remains of extensive pleurisy. Phthisis.
Disease (standardised): Pleurisy (Lung); Tuberculosis (Lung)
Admitted under the care of: Wilson, James Arthur
Medical examination performed by: n/a
Post mortem examination performed by: Hewett, Prescott Gardner
Medical notes: The patient was picked up on the street in a state of great exhaustion and brought to the Hospital by the Police. He stated that he had been ill for some time and had lately come out of the Chelsea Workhouse.
Body parts examined in the post mortem: Thorax and abdomen
Type of incident: n/a