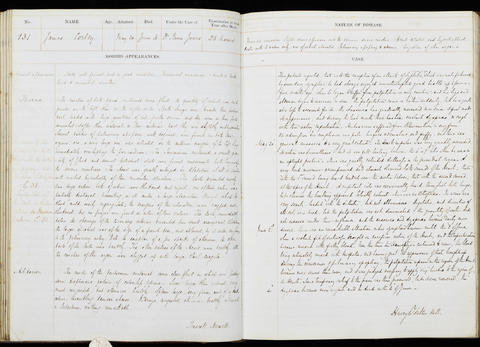 Occupation or role: [No occupation stated]
Age: [No age stated]
Gender: Male
Date of admission: 20 May 1846
Date of death: 4 Jun 1846
Disease (transcribed): Universal anasarca. Slight serous effusions into the various serous cavities. Heart dilated and hypertrophied. Aorta with two valves only, one of which ulcerated. Pulmonary apoplexy and oedema. Congestion of other organs.
Disease (standardised): Oedema (Universal); Disease (Heart); Ulcer (Aorta); Haemorrhage (Lung); Oedema (Lung)
Admitted under the care of: Bence Jones, Henry
Medical examination performed by: Fuller, Henry William
Post mortem examination performed by: Hewett, Prescott Gardner
Medical notes: This patient reported that with the exception of an attack of syphilis four years ago, which was not followed by secondary symptoms, he had always enjoyed uninterrupted good health up to four or five months ago, when he began to suffer from palpitation on any exertion and his legs and abdomen began to increase in size.
Body parts examined in the post mortem: Thorax and abdomen
Type of incident: n/a