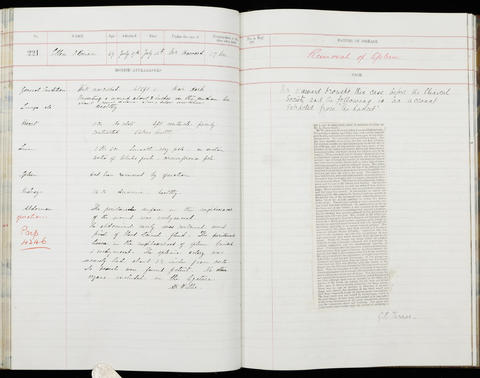 Occupation or role: [No occupation stated]
Age: 49
Gender: Female
Date of admission: 17 Jul 1881
Date of death: 13 Jul 1881
Disease (transcribed): Removal of spleen
Disease (standardised): Removal (Spleen)
Admitted under the care of: Haward, John Warrington
Medical examination performed by: Willis, Arthur Keith
Post mortem examination performed by: Turner, George Robertson
Medical notes: 'Mr Haward [John Warrington Haward] brought this case before the Clinical Society and the following is an account extracted from 'The Lancet': Mr Warrington Haward related a case of splenectomy. The patient, a woman aged forty-nine, had usually enjoyed good health, and had never suffered from ague or any intermittent fever. The catamenia [menstruation] had ceased three years. She had been married seven years, but had not had children. For eighteen months she had suffered pain in the left side of the abdomen, and for ten months had been aware of the presence of an abdominal tumour'
Body parts examined in the post mortem: Pleurae, lungs, heart, liver, spleen, kidneys, abdomen