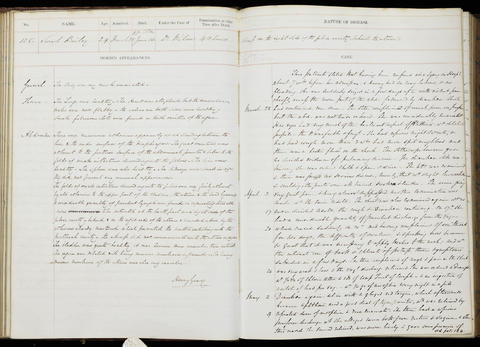 Occupation or role: [Occupation not stated]
Age: 24
Gender: Female
Date of admission: 28 Mar 1849
Date of death: 23 Jun 1849
Disease (transcribed): Abscess on the right side of the pelvic cavity, behind the uterus
Disease (standardised): Abscess (Abdomen)
Admitted under the care of: Wilson, James Arthur
Medical examination performed by: Barclay, Andrew Whyte
Post mortem examination performed by: Gray, Henry
Medical notes: 'This patient stated that having been confined at a lying-in hospital about 7 weeks before her admission, & having had an easy labour, & no flooding, she was suddenly seized in a few days after with violent pain, chiefly across the lower part of the abdomen, followed by diarrhoea which had continued ever since’
Body parts examined in the post mortem: Thorax, abdomen