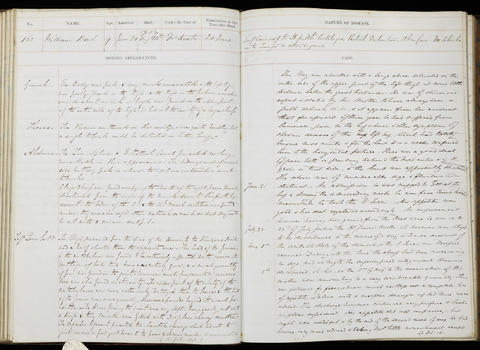 Admitted under the care of: Keate, Robert
Medical examination performed by: Holl, Harvey Buchanan
Post mortem examination performed by: Gray, Henry
Medical notes: 'This boy was admitted with a large abscess situated on the outer side of the upper part of the left thigh at some little distance below the great trochanter. He was of strumous aspect & stated by his mother to have always been a feeble, delicate child, & it appears from her account that for upwards of three years he had suffered from lameness, pain in the hip & knee & other symptoms of chronic disease of the left hip’
Body parts examined in the post mortem: Thorax, abdomen, left lower extremity