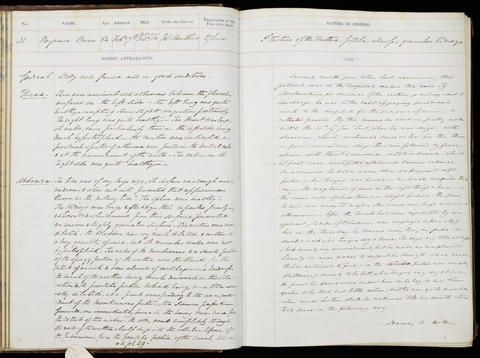 Occupation or role: [Occupation not stated]
Age: 62
Gender: Male
Date of admission: 7 Feb 1849
Date of death: 13 Feb 1849
Disease (transcribed): Stricture of the urethra. Fistula. Abscess. Granular kidneys
Disease (standardised): Constriction (Urethra); Fistula; Abscess; Disease (Kidneys)
Admitted under the care of: Hawkins, Caesar Henry
Medical examination performed by: Holl, Harvey Buchanan
Post mortem examination performed by: Gray, Henry
Medical notes: 'Several months prior to his last admission, this patient was in the hospital under the care of Mr Hawkins [Caesar Hawkins] for stricture of the urethra, & subsequent to discharge he was in the habit of paying periodical visits to the hospital for the purpose of having a caheter passed. By this means he went on pretty well until the 10th of January last, when he was seized with shivering, which continued more or less for the three or four succeeding days. This was followed by feverishness with thirst & anorexia, and his bowels, which at first were constipated, afterwards became relaxed’
Body parts examined in the post mortem: Thorax, abdomen