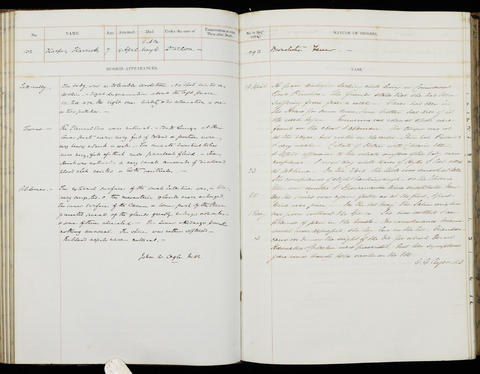 Occupation or role: [No occupation stated]
Age: 7
Gender: Female
Date of admission: 19 Apr 1856
Date of death: 6 May 1856
Disease (transcribed): Bronchitis. Fever
Disease (standardised): Bronchitis (Lung); Fever (Systemic)
Admitted under the care of: Wilson, James Arthur
Medical examination performed by: Rogers, George Goddard
Post mortem examination performed by: Ogle, John William
Medical notes: The friends states that she had been suffering from fever a week. Fever had been in the House for some time and one brother had died of it the week before. Numerous rose coloured spots were found on the chest and abdomen.
Body parts examined in the post mortem: Thorax and abdomen
Type of incident: n/a