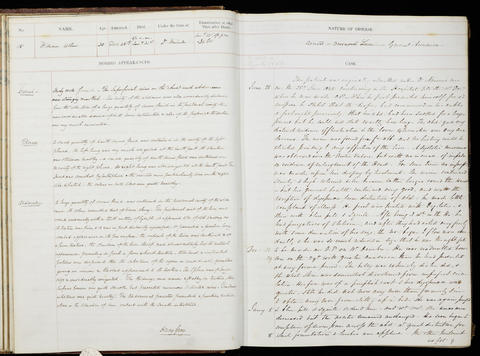 Occupation or role: [Occupation not stated]
Age: 30
Gender: Male
Date of admission: 28 Dec 1848
Date of death: 21 Jan 1849
Disease (transcribed): Ascites. Diseased liver. General anasarca
Disease (standardised): Ascites (Peritoneum); Disease (Liver); Edema (Systemic)
Admitted under the care of: Nairne, Robert
Medical examination performed by: Barclay, Andrew Whyte
Post mortem examination performed by: Gray, Henry
Medical notes: 'This patient was originally admitted under Dr Nairne’s [Robert Nairne] care on the 28th June 1848, continuing in the hospital till the 11th December when he was made OP [out-patient]. When he first presented himself for admission he stated that the dropsy had commenced in his ankles a fortnight previously, that his abdomen had been swelled for a longer period but he could not state exactly how long’
Body parts examined in the post mortem: Thorax, abdomen