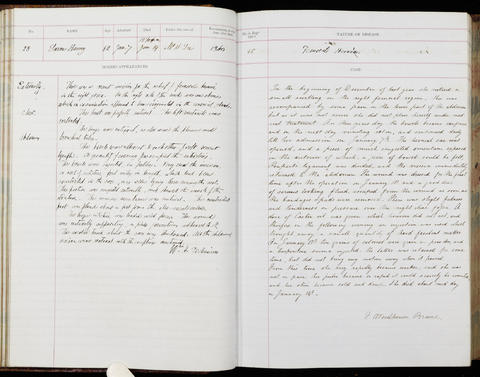 Occupation or role: Cook
Age: 62
Gender: Female
Date of admission: 7 Jan 1864
Date of death: 14 Jan 1864
Disease (transcribed): Femoral hernia (operation)
Disease (standardised): Hernia (Thigh); Operation
Admitted under the care of: Lee, Henry
Medical examination performed by: Dickinson, William Howship
Post mortem examination performed by: Braine, Francis Woodhouse
Medical notes: 'In the beginning of December of last year she noticed a small swelling in the right femoral region. This was accompanied by some pain in the lower part of the abdomen, but as it was not severe, she did not place herself under medical treatment’
Body parts examined in the post mortem: Chest, abdomen