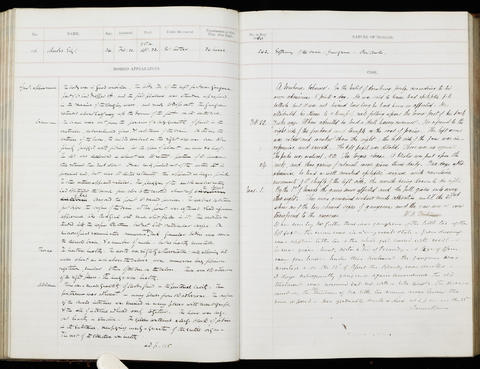 Occupation or role: Brewhouse labourer
Age: 34
Gender: Male
Date of admission: 22 Feb 1860
Date of death: 23 Apr 1860
Disease (transcribed): Softening of the brain. Gangrene. Peritonitis
Disease (standardised): Softening (Brain); Gangrene; Peritonitis (Abdomen)
Admitted under the care of: Cutler, Edward
Medical examination performed by: Dickinson, William Howship and Rouse, James
Post mortem examination performed by: Holmes, Timothy
Medical notes: 'A brewhouse labourer. In the habit of drinking freely, according to his own admission 5 pints a day. He was said to have had epileptic fits latterly, but it was not learned how long he had been so affected. He attributed his illness to a lump of coal falling upon the lower part of his back 7 weeks ago’
Body parts examined in the post mortem: Cranium, thorax, abdomen