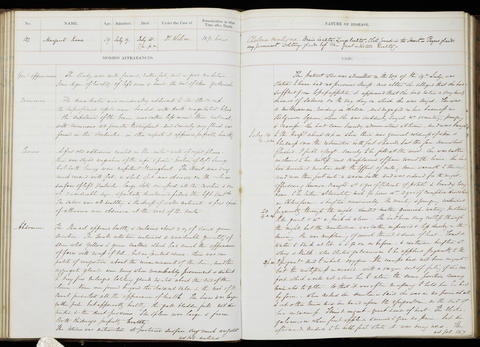 Occupation or role: Milkwoman
Age: 19
Gender: Female
Date of admission: 19 Jul 1849
Date of death: 21 Jul 1849
Disease (transcribed): Cholera maligna. Brain healthy. Lungs healthy, clots found in the heart. Peyers glands very prominent, solitary glands less so. Great intestine healthy
Disease (standardised): Cholera (Intestines)
Admitted under the care of: Wilson, James Arthur
Medical examination performed by: Barclay, Andrew Whyte
Post mortem examination performed by: Barclay, Andrew Whyte
Medical notes: 'This patient, who was admitted in the evening of the 19th July, was stated to have had no previous illness, and although she alleged that she had suffered from loss of appetite, it appeared that she had eaten a very hearty dinner of salmon on the day on which she was seized. She was a milkwoman, residing in Chelsea, and engaged in her business in Belgrave Square, when she was suddenly seized with vomiting, purging & cramps’
Body parts examined in the post mortem: Cranium, thorax, abdomen