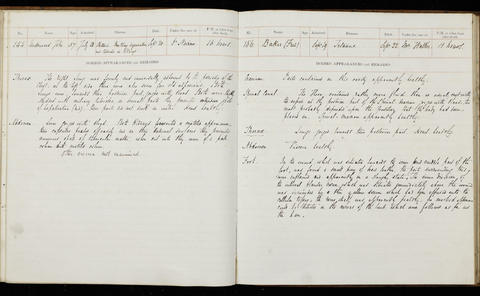 Occupation or role: [No occupation stated]
Age: 12
Gender: Male
Date of admission: 28 Aug 1841
Date of death: 18 Sep 1841
Disease (transcribed): Fracture of skull. Inflammation of the membranes and brain
Disease (standardised): Fracture (Skull); Inflammation (Brain)
Admitted under the care of: Keate, Robert
Medical examination performed by: n/a
Post mortem examination performed by: n/a
Medical notes: 'This boy was admitted into the house with a compound fracture of the skull with depression of bone but without symptoms; he was trephined shortly after his admission. Did very well for several days until inflammatory action was set up in the cavity of the cranium’
Body parts examined in the post mortem: Cranium, thorax