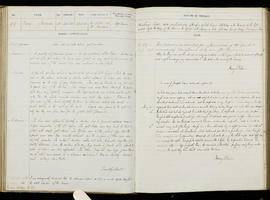 Occupation or role: [No occupation stated]
Age: 68
Gender: Female
Date of admission: 16 Apr 1845
Date of death: 16 Apr 1845
Disease (transcribed): Old adhesions. Partial, lobular grey hepatisation of the apices of both lungs. Dilatation with thinning of the left ventricle. Slight thickening of the valves on the left side, with atheroma in aorta. Gall stones. Granular kidneys. Fibrous tumours in uterus
Disease (standardised): Hepatisation (Lungs); Disease (Heart); Plaque, atherosclerotic (Aorta); Gallstone (Gall bladder); Disease (Kidneys); Tumour (Uterus)
Admitted under the care of: Cutler, Edward and Macleod, Roderick
Medical examination performed by: Hewett, Prescott Gardner
Post mortem examination performed by: Fuller, Henry William
Medical notes: 'This patient was admitted for inflammation of the eye, but immediately transferred to the care of the physician. When the physician saw her, she was in a dying condition, unable to give a distinct account of herself and unfit to undergo any examination. She died in the course of the evening’
Body parts examined in the post mortem: Cranium, thorax, abdomen