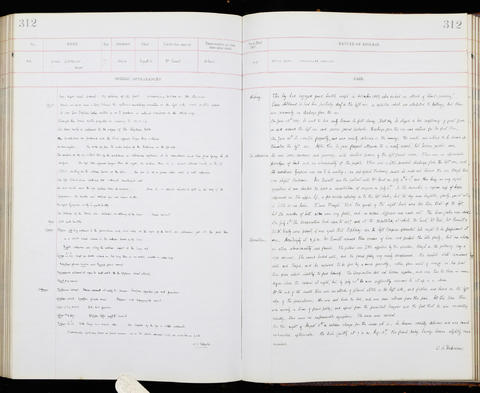 Occupation or role: Baker
Age: 17
Gender: Male
Date of admission: 4 Jul 1891
Date of death: 12 Aug 1891
Disease (transcribed): Otitis media. Cerebellar abscess
Disease (standardised): Otitis media (Ear); Abscess (Brain)
Admitted under the care of: Ewart, William
Medical examination performed by: Rolleston, Humphry Davy
Post mortem examination performed by: Dickinson, William Lee
Medical notes: 'This boy had enjoyed good health except in December 1889 when he had an attack of ‘blood-poisoning'. Since childhood he had been partially deaf in the left ear, a condition which was attributed to bathing, but there was commonly no discharge from the ear. On June 18th 1891 he went to bed early because he felt drowsy. Next day he stayed in bed complaining of great pain in and around the left ear and severe general headache. Discharge from the ear was noticed for the first time. On June 30th he vomited frequently, and was noisily delirious in the evening. The mouth was noticed to be drawn up towards the left ear. After this he gave frequent utterance to a ‘nasty screech', but became quieter soon'
Body parts examined in the post mortem: Head, spine, thorax, abdomen