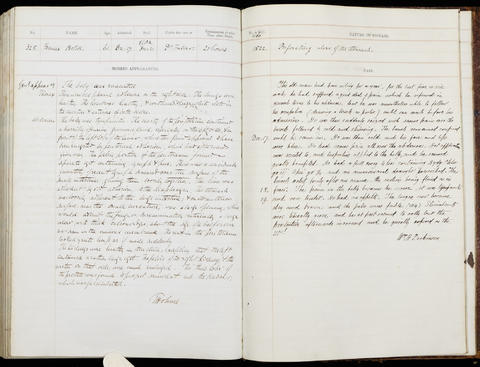 Occupation or role: Truck porter
Age: 61
Gender: Male
Date of admission: 17 Dec 1860
Date of death: 21 Dec 1860
Disease (transcribed): Perforating ulcer of the stomach
Disease (standardised): Ulcer (Stomach)
Admitted under the care of: Fuller, Henry William
Medical examination performed by: Dickinson, William Howship
Post mortem examination performed by: Holmes, Timothy
Medical notes: 'This old man had been ailing for a year, for the last five or six weeks he had suffered a good deal of pain which he referred in general terms to his abdomen, but he was nevertheless able to follow his occupation (drawing a truck as porter) until one week before his admission’
Body parts examined in the post mortem: Thorax, abdomen