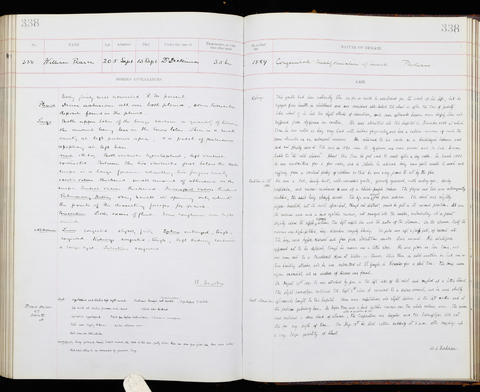 Occupation or role: Bricklayer's labourer
Age: 20
Gender: Male
Date of admission: 5 Sep 1891
Date of death: 13 Sep 1891
Disease (transcribed): Congenital malformation of heart. Phthisis
Disease (standardised): Malformation (Heart); Tuberculosis (Lungs)
Admitted under the care of: Dickinson, William Howship
Medical examination performed by: Newton, Reginald Frederick Henry
Post mortem examination performed by: Dickinson, William Lee
Medical notes: 'This youth had been noticeably blue so far as could be ascertained for the whole of his life, but he enjoyed fair health in childhood and was considered able-bodied till about or after the time of puberty. When about 17 he had two slight attacks of rheumatism, and soon afterwards became more deeply blue and suffered from dyspnoea on exertion. He was admitted into this hospital in November 1888 at which time he was noted as being very livid with bulbous finger ends, and had a cardiac murmur of much the same character as on subsequent occasions. He returned to his work as a bricklayer's labourer and did not finally leave it till early in 1890'
Body parts examined in the post mortem: Pleurae, lungs, abdomen