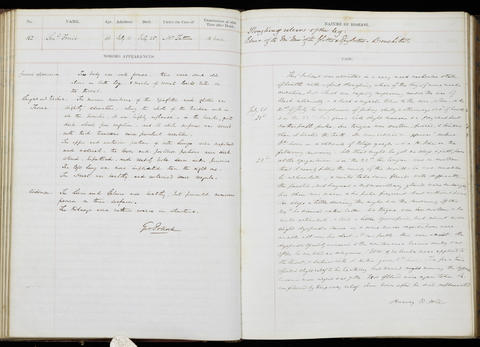 Occupation or role: [Occupation not stated]
Age: 42
Gender: Male
Date of admission: 11 Jul 1849
Date of death: 25 Jul 1849
Disease (transcribed): Sloughing ulcers of the leg. Oedema of the mucous membrane of the glottis & epiglottis. Bronchitis
Disease (standardised): Ulcer (Leg); Edema (Larynx); Bronchitis (Lungs)
Admitted under the care of: Tatum, Thomas
Medical examination performed by: Holl, Harvey Buchanan
Post mortem examination performed by: Pollock, George
Medical notes: 'This patient was admitted in a very weak cachectic state of health with a foul, sloughing ulcer of the leg of some weeks’ duration, but which was rapidly improving udner the use of bark internally & a bark of myrrha lotion to the sore, when, on the 21st of July, he complained of feeling chilly & otherways out of health’
Body parts examined in the post mortem: Larynx, trachea, thorax, abdomen