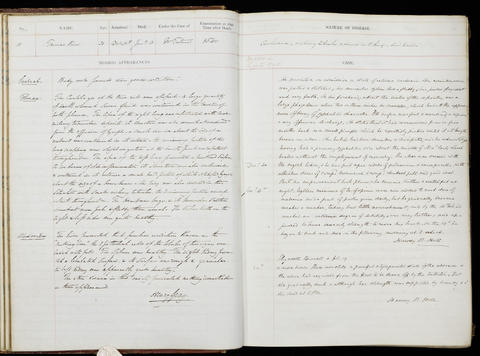 Occupation or role: [Occupation not stated]
Age: 30
Gender: Male
Date of admission: 30 Dec 1848
Date of death: 13 Jan 1849
Disease (transcribed): Cachexia, miliary tubercles & vomicae in the lungs. Diseased liver
Disease (standardised): Cellulitis (Skin); Tuberculosis (Lungs); Abscess (Lungs); Disease (Liver)
Admitted under the care of: Tatum, Thomas
Medical examination performed by: Holl, Harvey Buchanan
Post mortem examination performed by: Gray, Henry
Medical notes: 'He presented on admission a state of extreme cachexia. His countenance was pallid & blotched, his muscular system lax & flabby, his pulse frequent and very feeble. On his forehead, about the centre of the os frontis, was a large phagedaenic ulcer two or three inches in diameter, which had all the appearance of being of a syphalitic character. The surface was foul & secreting a copious & very offensive discharge. He stated that it had commenced four or five months back as a small pimple which he repeatedly picked until it at length became an ulcer. His habits had been drunken & dissipated, and he acknowledged having had a primary syphalitic sore about the middle of November last, which healed without the employment of mercury’
Body parts examined in the post mortem: Thorax, abdomen