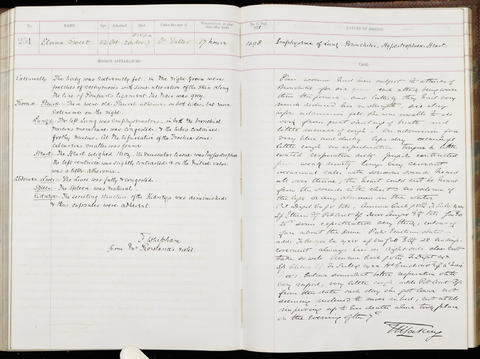 Admitted under the care of: Fuller, Henry William
Medical examination performed by: Laking, Francis Henry
Post mortem examination performed by: Whipham, Thomas Tillyer and Rowland, Edward Roger
Medical notes: 'This woman had been subject to attacks of bronchitis for six years, each attack being worse than the former, and latterly they had very much reduced her in strength. Six days before admission fell she was unable to do work from great shortness of breath and little increase of cough’
Post mortem notes: Body parts examined in the post mortem: Thorax, abdomen