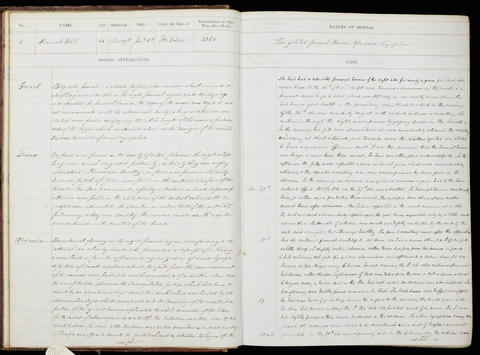 Occupation or role: [Occupation not stated]
Age: 60
Gender: Female
Date of admission: 27 Dec 1848
Date of death: 6 Jan 1849
Disease (transcribed): Strangulated femoral hernia. Operation. Erysipelas
Disease (standardised): Hernia (Thigh); Operation Erysipelas (Skin)
Admitted under the care of: Tatum, Thomas
Medical examination performed by: Holl, Harvey Buchanan
Post mortem examination performed by: Gray, Henry
Medical notes: 'She had had a reducible femoral hernia of the right side for nearly 4 years, for which she wore a truss. On the 26th of December she felt some tenseness & uneasiness in the bowels & a frequent desire to go to stool, which resulted only in one scanty evacuation. She had been in good health on the preceding day. About 10 o’clock on the evening of the 26th she was suddenly seized with violent sickness & vomiting, which continued through the night, accompanied by griping pains in the bowels’
Body parts examined in the post mortem: Thorax, abdomen