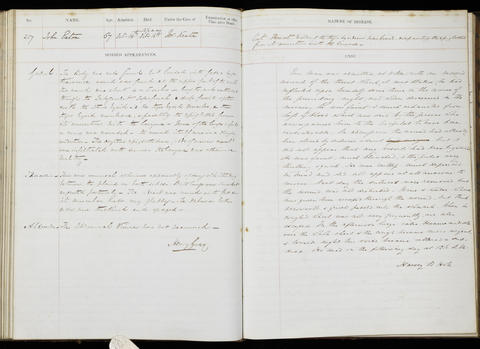 Occupation or role: [Occupation not stated]
Age: 67
Gender: Male
Date of admission: 14 Oct 1849
Date of death: 16 Oct 1849
Disease (transcribed): Cut throat, dividing the thyrohyoidean membrane, & separating the epiglottis from its connection with the larynx
Disease (standardised): Cut (Throat)
Admitted under the care of: Keate, Robert
Medical examination performed by: Holl, Harvey Buchanan
Post mortem examination performed by: Gray, Henry
Medical notes: 'This man was admitted at 11am, with an incised wound of the throat which, it was stated, he had inflicted upon himself some time in the course of the preceding night, and when discovered in the morning, he was faint & much exhausted from loss of blood which was said by the persons who accompanied him to the hospital to have been considerable’
Body parts examined in the post mortem: Thorax, abdomen