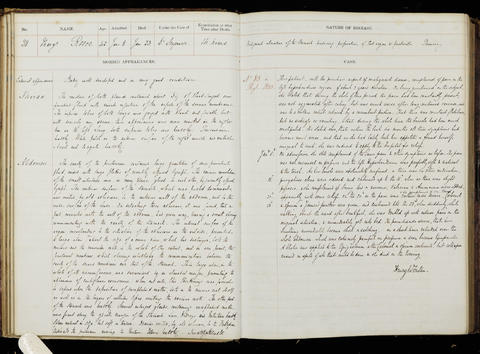 Occupation or role: [No occupation stated]
Age: 42
Gender: Female
Date of admission: 8 Jan 1845
Date of death: 23 Jan 1845
Disease (transcribed): Malignant ulceration of the stomach, producing perforation of that organ & peritonitis. Pleurisy
Disease (standardised): Ulcer (Stomach); Peritonitis (Abdomen); Pleurisy (Lungs)
Admitted under the care of: Seymour, Edward James
Medical examination performed by: Hewett, Prescott Gardner
Post mortem examination performed by: Fuller, Henry William
Medical notes: 'This patient, with the peculiar aspect of malignant disease, complained of pain in the left hypochondriac region, of about 2 years’ duration. On being questioned on the subject, she stated that during the whole of this period the pain had been constantly present, was not aggravated after eating, but was much worse after long continued exercise, and was to a certain extent relieved by a recumbent position’
Body parts examined in the post mortem: Thorax, abdomen