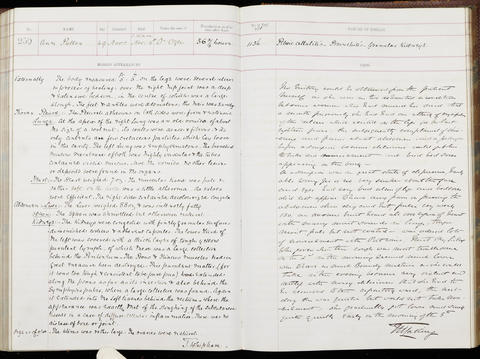 Admitted under the care of: Ogle, John William
Medical examination performed by: Laking, Francis Henry
Post mortem examination performed by: Whipham, Thomas Tillyer
Medical notes: 'No history could be obtained from the patient herself as she was in too exhausted a condition, but some woman who had nursed her said that a month previously she had had an attack of erysipelas of the ulcers which existed on the legs for the last eighteen years. She subsequently complained of shivering and pain about abdomen’
Post mortem notes: Body parts examined in the post mortem: Thorax, abdomen, organs of generation