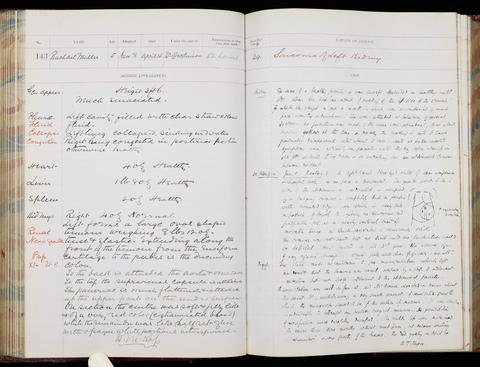 Occupation or role: [No occupation stated]
Age: 5
Gender: Female
Date of admission: 8 Jan 1884
Date of death: 26 Apr 1884
Disease (transcribed): Sarcoma of left kidney
Disease (standardised): Sarcoma (Kidney)
Admitted under the care of: Dickinson, William Howship
Medical examination performed by: Myers, Arthur Thomas
Post mortem examination performed by: Ross, Daniel McClure
Medical notes: In 1881 she had ‘an attack of swelling of the left side of the stomach’ for which she stayed in bed for a month. The swelling was said to have gradually disappeared and no further morbid symptoms were noticed until the day before admission when an abdominal tumour became evident.
Body parts examined in the post mortem: Pleurae, heart, liver, spleen and kidneys
Type of incident: n/a