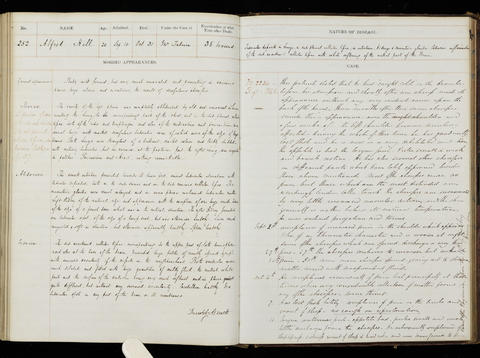 Occupation or role: [No occupation stated]
Age: 20
Gender: Male
Date of admission: 10 Sep 1845
Date of death: 31 Oct 1845
Disease (transcribed): Tubercular deposits in lungs, in sub-pleural cellular tissue, in intestines, kidneys & mesenteric glands. Extensive inflammation of the sub-arachnoid cellular tissue with white softening of the central part of the brain
Disease (standardised): Tuberculosis (Lungs, tissue, intestines, kidneys, mesenteric glands); Inflammation (Brain); Softening (Brain)
Admitted under the care of: Tatum, Thomas
Medical examination performed by: Hewett, Prescott Gardner
Post mortem examination performed by: Lee, Henry
Medical notes: 'This patient stated that he had ‘caught cold’ in the December before his admission and shortly after an abscess made its appearance without any very evident cause upon the back of the hand. Three months after this some abscesses made their appearance near the right shoulder and a few weeks after the left shoulder became similarly affected’
Body parts examined in the post mortem: Thorax, abdomen, cranium

Preparation of some of the ribs and tubercles in the sub-pleural cellular tissue, see museum catalogue G.37