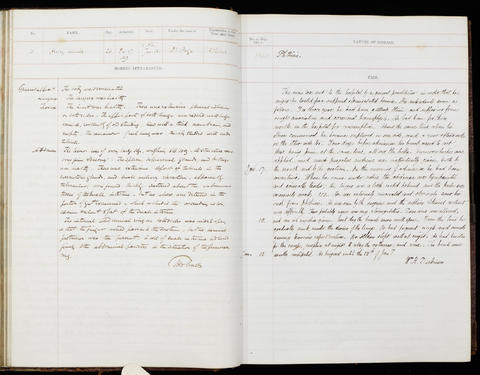 Occupation or role: [Occupation not stated]
Age: 26
Gender: Male
Date of admission: 17 Dec 1859
Date of death: 12 Jan 1860
Disease (transcribed): Phthisis
Disease (standardised): Tuberculosis (Lungs)
Admitted under the care of: Page, William Emanuel
Medical examination performed by: Dickinson, William Howship
Post mortem examination performed by: Holmes, Timothy
Medical notes: 'This man was sent to the hospital by a general practitioner in order that he might be treated for a supposed strangulated hernia. His antecedents were as follows. For three years he had been getting thin and suffering from cough, emaciation and occasional haemoptysis. He had been for three months in the hospital for consumption’
Body parts examined in the post mortem: Larynx, thorax, abdomen