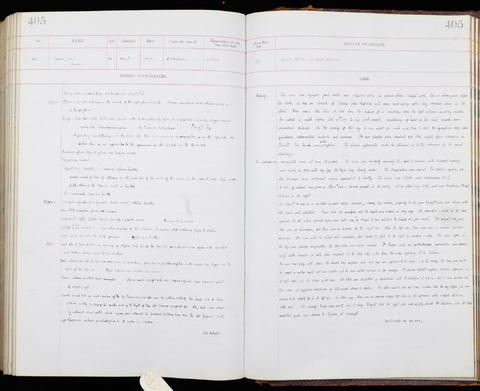 Occupation or role: Porter
Age: 20
Gender: Male
Date of admission: 4 Nov 1891
Date of death: 9 Nov 1891
Disease (transcribed): Otitis media. Cerebral abscess
Disease (standardised): Otitis media (Ear); Abscess (Brain)
Admitted under the care of: Whipham, Thomas Tillyer
Medical examination performed by: Rolleston, Humphry Davy
Post mortem examination performed by: Dickinson, William Lee
Medical notes: 'This man had enjoyed good health and suffered from no serious illness except when, ten or eleven years before his death, he was an inmate of Charing Cross Hospital with some head injury after being knocked down in the street. Ever since this time he had been the subject of a discharge from the left external auditory meatus. For about a week before Oct 29th 1891 he had felt unwell, complaining of ‘cold in the head', earache and occasional sickness'
Body parts examined in the post mortem: Thorax, abdomen, head